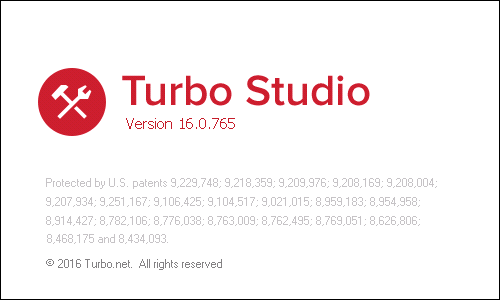 The latest version of Turbo Studio includes direct integration with the Turbo.net Hub, an installer based wizard alternative to snapshots, the ability to create portable container (single EXE) outputs, new subscription-based licensing, as well as support for the latest Windows operating systems.

Launch Applications with No Installs

Give users an instant launch experience and reduce support costs by packaging all application files, settings, runtimes, and components into a single package that runs instantly with zero setup.

Execute .NET, Java and AIR-based applications with no separate installation steps or runtime versioning conflicts. The Turbo virtual machine supports all versions of the .NET Framework and Java, including .NET 4.0, 4.2, and 4.5.

Boost security by locking down desktops and deploying on clean base images. Turbo allows all of your applications to work properly without administrative rights or access to privileged system resources.

Turbo eliminates application failures due to missing or mismatched component versions by packaging runtimes and other application components together with dependent application executables.

Turbo allows legacy applications such as Internet Explorer 6 to run properly on new operating systems such as Windows 7 and 8, reducing the cost and risk associated with operating system rollouts.

Dynamic isolation management allows virtualized applications to run both in complete isolation or in shared virtual environments with other applications, allowing data and settings to be shared between related applications.

No client installation, device drivers, or other infrastructure changes are required. Turbo is fully compatible with existing desktop management infrastructure such as Microsoft System Center, LANDesk, Altiris, and KACE. Or, distribute and manage virtual applications with the included TurboServer.

Configuring even the most complex proprietary application is as easy as setting it up on a clean machine. Studio's snapshotting feature takes "before and after" images of your system and automatically constructs the virtual application configuration.

Turbo is the only virtualization engine in its class to support virtualization of both 32- and 64-bit applications; system services and databases such as SQL Server; and advanced software technologies such as DCOM and SxS.

Turbo allows legacy applications such as Internet Explorer 6 to run properly on Windows 7 and 8, reducing the costs and risks associated with operating system rollouts and assuring business continuity.

Dynamic isolation management allows applications to run both in complete isolation or in shared virtual environments. Sandbox sharing enables data and settings to be shared between related applications.

Included TurboServer allows applications virtualized with Studio to be deployed, patched, and managed on your intranet. TurboServer is over 20 times more scaleable than RDP-based deployment.

Bring Your Application to the Cloud

Included Turbo.net application hosting allows you to publish directly from the web. Launch applications instantly from your web site, syndicate on blogs and social networks, or deploy Software-as-a-Service (SaaS) offerings.

Multi-modal distribution allows virtualized applications to be deployed as standalone EXEs and MSIs, in private clouds using TurboServer, or over the Internet with Turbo.net.

Turbo technology is used by industry-leading educational, entertainment, financial, government, health care, and information technology organizations such as Autodesk, Bank of America, Novell, and the US Army.